This is one of the six remaining sets of quartets compiled with Antonio Stradivari (1644-1737) instruments known to exist today. The name of this quartet derives from Niccolò Paganini (1782-1840), a legendary violinist of the 19th century, who used and played these instruments for his own quartet in the 1830’s. After the death of Paganini in 1840, the instruments were separated until Emil Herrmann, a renowned dealer in New York, brought them back together in 1940s. The four instruments were displayed in the exhibition “Fiddles of the Master Craftsmen” at the Brooklyn Museum in 1945, commemorating the 300th anniversary of the birth of Antonio Stradivari and the 200th anniversary of the death of Bartolomeo Giuseppe Guarneri. Mrs. Anna E. Clark, the widow of the U.S. Senator William A. Clark, purchased the quartet from Emil Herrmann in 1946, and in 1964, donated them to the Corcoran Gallery of Arts in Washington D.C., under the condition of loaning them to musicians. Later, the Corcoran Gallery put them on sale, and in February 1994, they were acquired by the Nippon Music Foundation. Succeeding the will of Mrs. Clark, the Foundation loans them to string quartets as a set.

This violin was one of the Stradivari instruments possessed by the celebrated violin virtuoso Niccolò Paganini (1782-1840) and together with a violin of 1727, a viola of 1731, and a cello of 1736, formed the quartet. After Paganini, the violin was purchased by Parisian dealer Jean-Baptiste Vuillaume from Paganini’s son, Baron Achille, and was sold to Mr. Desaint of Amiens in 1867. In 1902, it was bought by Parisian dealer Albert Caressa and sold to Mr. Levers of Poitiers. Albert Caressa acquired the violin again and sold it to Mr. Pierre de Ellisseieff of Moscow in 1906. Subsequently, in 1922, the violin passed into the hands of Mr. Boris Kitchin, from whom it was bought by Emil Herrmann, dealer of New York, in 1925. He then sold it to the collector Mr. David H. Walton in 1926. With his entire collection, Herrmann repurchased the violin in 1944 and sold it, together with the 1727 violin, the 1731 viola and the 1736 cello, to Mrs. Anna E. Clark of New York in 1946. Mrs. Clark donated this quartet to the Corcoran Gallery of Arts in Washington D.C., from which the Nippon Music Foundation acquired the set in 1994.

The history of this violin dates back to Count Cozio di Salabue. In 1817, Niccolò Paganini (1782-1840) obtained this violin, and from his son Baron Achille, Parisian dealer Jean-Baptiste Vuillaume acquired it and then sold it to Comte de Vireille in 1853. In around 1893, the violin was bought by Ernest Nicolini, a tenor and amateur violinist, who was the husband of famous soprano Adelina Patti (1843-1919). It was then passed into the hands of violinist Jan van Oordt in 1900 through George Hart, dealer of London. Owing to financial difficulties, Oordt sold it back to Hart a few years later. Hart sold it again to Mr. Henry Such in 1903 and repurchased it in 1909. He then sold it to Mr. Brown of Liverpool in 1911. Subsequently, English collector Mr. Frederic Smith obtained it and sold it to W. E. Hill & Sons. In 1914, it was sold to renowned collector Mr. Felix Kahn of New York, and in 1920 it passed into the hands of Ms. Helen Jeffrey. After passing ownership by W. R. Ford & Co. in 1927, the violin was purchased by Emil Herrmann in 1945, and sold to Mrs. Anna E. Clark in 1946.

This is one of the twelve remaining violas made by Antonio Stradivari known to exist today. It was brought to England in the late 18th century and sold by the dealer John Betts to Mr. E. Stephenson, banker and owner of a collection of instruments. In around 1831, he passed his entire collection into the hands of well-known dealer George Corsby. In 1832, Niccolò Paganini (1782-1840), during his first visit to England, bought the viola to complete a Stradivari quartet. He was so enamored of the instrument that he commissioned composer Hector Berlioz (1803-1869) to write a symphony for him in which the viola has a solo part, “Harold en Italie” was the result. After the death of Paganini, his son, Baron Achille, sold the viola to Parisian dealer Jean-Baptiste Vuillaume who in turn sold it to Mr. Otto Booth in 1853, an English musical enthusiast who, with the acquisition of this viola, completed a quartet of Stradivarius. The viola was acquired by W. E. Hill & Sons in 1884 and by Baron Knoop in 1892. In the same year, Mr. Robert von Mendelssohn bought the viola on the advice of violinist Joseph Joachim (1831-1907) so that the viola would be played in the famous Joachim Quartet. The viola was purchased by Emil Herrmann in 1944, and sold to Mrs. Anna E. Clark in 1946.

In 1840, this cello was sold from Parisian dealer Jean-Baptiste Vuillaume to a German amateur named Mr. Lemire and after his death bought by Mr. Vloss von Amstel. In 1875, it was passed to Mr. Krumbholz of Stuttgart. After his death in about 1876, an art dealer in Frankfurt named Kaiser acquired it and passed it on to the collector Mr. C. G. Meier of London. In 1877, he sold it to Mr. Ernest Ladenburg, councillor of Frankfurt, who in turn sold it to Mr. Robert von Mendelssohn in 1895, after which it remained in the possession of the Mendelssohn family. Renowned dealer Emil Herrmann obtained this cello in around 1944 and then sold it to Mrs. Anna E. Clark in 1946.

1727 Violin “Paganini”
The back is in two pieces of maple, marked by a medium curl, sloping slightly downwards from the center joint. The sides are marked by a strong narrow curl. The scroll is marked by medium curl. The table is of spruce marked by bold medium grain, more open at the flanks. The varnish is reddish brown in color.

1731 Viola "Paganini"
The back is in one piece of maple, marked by a strong medium curl ascending to the right. The sides are marked by a smaller curl. The scroll is almost plain. The table is of spruce marked by strong, mainly fine grain. The varnish is golden orange brown in color.

1736 Cello "Paganini"
The back is in two pieces of maple marked by a handsome small horizontal curl. The sides are marked by a very strong small curl. The scroll is of almost plain maple. The table is of spruce marked by medium grain at the center, opening towards the flanks. The varnish is dark red-brown in color. 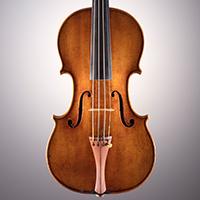 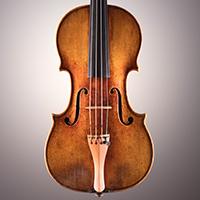